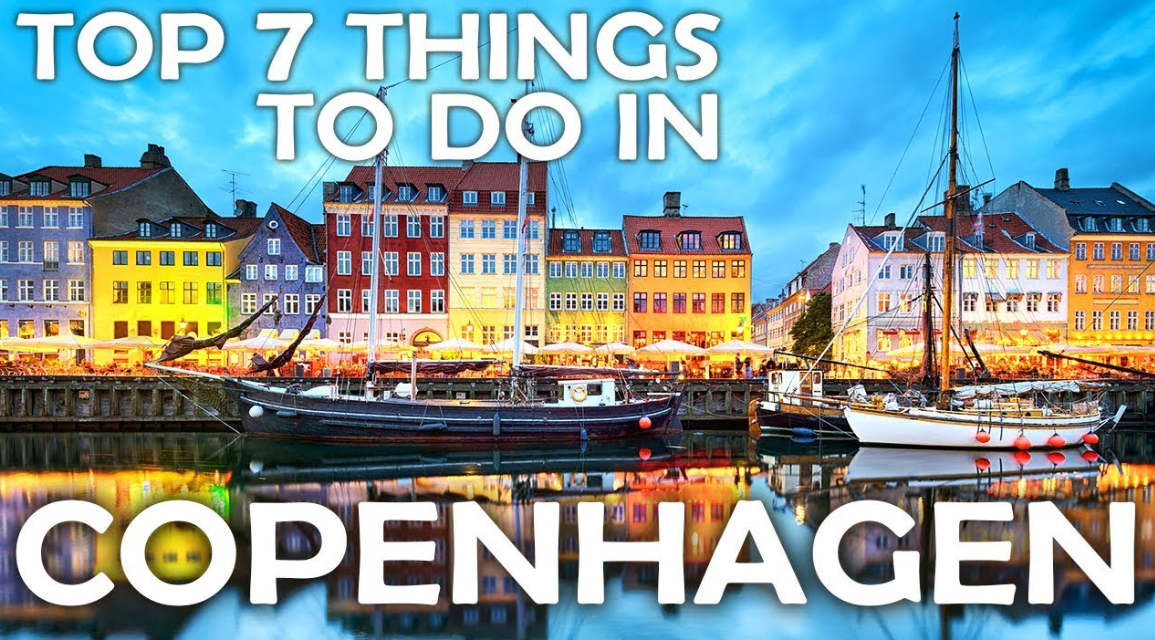 Things To Do In Copenhagen: Copenhagen is effortlessly cool, culturally rich and the essence of Scandinavian chic. There is a lot to love here, to investigate and discover at your own pace, but in case you are in need of some inspiration I’ve put together my favorite 25 unique things to do in Copenhagen. Enjoy!

One of the most liveable cities on Earth, Copenhagen – and Denmark – is driven by a deep-seated desire to be the greenest, the cleanest and the most sustainable it can be. Aimlessly wandering its picturesque streets is easy – once you learn to watch out for the constant barrage of cyclists – and getting lost is half the fun as everything in Copenhagen compact, and a metro or bus is never far away!

Lovers of all things elegant and divine will find themselves almost overwhelmed with the choices – from the New Age Nordic dining and Danish design galleries to the majestic royal palaces, contemporary fashion and of course the famed crown jewels of Denmark.

Things To Do In Copenhagen Denmark

It’s easy to fall in love with Copenhagen, a city at once historic and modern, traditional and innovative. Known for its design scene, top-notch cuisine and hip, laid-back atmosphere, this Scandinavian capital is certainly not considered a budget destination.

Surprisingly, though, there is a multitude of experiences to be had for no cost at all, among them some of the most famous sights that Copenhagen has to offer.

Its vibrant colours and historic tall ships make Nyhavn Copenhagen’s most famous destination. Stroll down the less famous side for the best views and photographs, as well as look at house number 20, where beloved Danish author Hans Christian Andersen was living in 1835 when he published his first volume of fairy tales.

To avoid the sky-high prices of the harbourside restaurants, do as the locals do and pick up a snack and some beers to enjoy a picnic at the water’s edge. And don’t let the crowds discourage you from going to see this picturesque harbour in high season; it’s still well worth the visit.

2. Marvel at the views from Christiansborg Palace

Christiansborg Palace is home to the Danish Parliament and Royal Reception Rooms. Although there is a fee to tour much of Christiansborg itself, entrance to the tower is free. Christiansborg Tårnet is Copenhagen’s highest viewpoint, with stunning views in all directions. From here, you can take in the sweeping cityscape and even see across the water to Sweden.

Behind the tower is the outdoor Royal Riding Ring, where you can often spot some of the Queen’s 20 white horses enjoying warm weather or training for their royal duties.

3. There’s more than The Little Mermaid on the harbourside

Visitors from all over the world eagerly flock to see Copenhagen’s most famous resident, Hans Christian Andersen’s The Little Mermaid. Perched on her rock, the sculpture is much smaller than many expect, and some say she is an overrated attraction. However, the walk up the harbourside is worthwhile, as there are other sights to take in on your way to visit the iconic mermaid.

The Gefion Fountain, featuring the mythical Gefion and her oxen, is an imposing creation overlooked by St Alban’s Church. Behind the fountain is Kastellet, a star-shaped fortress built in the 1600s to defend the city, and visitors are free to stroll the grounds and its historic buildings and windmill.

Copenhagen is home to an impressive range of historical and art museums. The formerly free Statens Museum for Kunst and Nationalmuseet unfortunately began charging admission fees for adults in summer 2016, though under-18s can still enter free of charge. You can still get your fill of amazing artworks without paying a thing, however.

The sprawling Ny Carlsberg Glyptotek is filled with sculptures and paintings by the likes of Rodin and Van Gogh, along with historic artefacts, and can be explored for free on Tuesdays. The more quaint Thorvaldsens Museum, next to Christiansborg Palace, is entirely dedicated to works and collections of Danish sculptor Bertel Thorvaldsen, and is free to enter on Wednesdays. Also free on Wednesdays is the nearby Nikolaj Kunsthal, a contemporary arts centre housed in a former church whose magnificent spire towers over the city.

However, those who stray from the bustling shopping street are rewarded with charming, quieter squares like Gråbrødretorv and some of the most picturesque streets in the city, such as Magstræde, a curved, cobblestone beauty lined with colourful old homes.

At the end of Strøget sits Rådhuspladsen, home of Copenhagen’s Italian-inspired City Hall, where visitors can admire the ornate lobby and marvel at Jens Olsen’s World Clock, an incredibly intricate piece of timekeeping. Exploring the square, you can discover the Gothic-style Dragon Fountain, the popular statue of Hans Christian Andersen, and the stone pillar marking the former site of Vesterport, the western gate of the wall which used to surround the city.

7. Enjoy a bit of fresh air at the King’s Gardens

Copenhagen is full of green spaces, but the King’s Gardens are especially lovely. The gardens serve as the sweeping grounds of Rosenborg Castle, which was built as the Royal summer home in the 1600s and is now a museum.

The gardens are the perfect place for a quiet stroll to admire the flowers, tree-lined alleys, and sculptures. It’s also a popular spot with locals to enjoy a picnic in warmer weather. The nearby Botanical Gardens is a 10-hectare oasis boasting 13,000 species of plants, flowers and trees, as well as a lake and a series of glasshouses.

8. Have a right royal time at Amalienborg Palace

Amalienborg Palace is the official city residence of Queen Margrethe II and the Danish Royal Family. It’s unique in that the palace is made up of four former mansions facing a central square. The best time to visit Amalienborg is at noon to witness the Changing of the Guard. Every day, members of the Royal Life Guard march through the city from their barracks to the palace to take over the watch.

Copenhagen’s food-scene is making international waves, as the profusion of Michelin-starred restaurants will tell you, and the city has been one of Europe’s design capitals for decades now (Foodie? Check out the this Copenhagen’s Culinary Experience Tour). It all adds up to a dynamic, progressive and fun destination in Denmark.

Let’s explore the best things to do in Copenhagen:

Such is this theme park’s fame that some people come to Copenhagen just t visit Tivoli Gardens.

And even if you’re not in the mood to get on a rollercoaster or carousel it’s an unforgettable place for an amble thanks to its romantic 19th-century representations of the Orient.

After Bakken, also in Copenhagen, Tivoli Gardens is the world’s oldest theme park, and if you do have kids with you they will have the time of their lives on some of these rides.

Worth special mention is the Star Flyer, a carousel that hikes riders up 80 metres above the ground.

This instantly recognisable statue sitting on a rock next to the Langelinie promenade is surely the most famous landmark in the city.

The sculptor Edvard Eriksen created the mermaid in 1913 as a tribute to the author Hans Christian Andersen, and it’s inspired by Andersen’s eponymous fairytale.

When you get up close to the statue what will surprise you is how small it actually is, but you’ll have to take a photo because it’s simply one of those international identifiers.

This pedestrian street runs on and on, and whether you’re up for high-street or high-end shopping the chances are you’ll find what you’re looking for here.

It’s among the largest pedestrian malls in the world and even if the prices aren’t for the faint-hearted.

If you want to find some independent shops then follow Strøget into the Old City and then try one of the narrow side streets.

There’s a wonderful mix of old specialty businesses that go back generations and hip boutiques for young fashionistas.

New Harbour in English, this historic waterfront area is next to a 17th-century canal where old wooden ships are still moored.

On both sides of the canal are tall painted houses dating to the 1600s and 1700s, the ground floors of which house bars, restaurants and cafes with outdoor seating.

It’s hard to believe it now, but for most of its existence this was a seedy part of town.

Now it’s one of the best places to linger of a coffee or beer in summer.

And it’s a big literary landmark too: The house numbers 18, 20 and 67 (marked with a plaque) were home to the author Hans Christian Andersen at different times.

Copenhagen’s National Museum is the sort of attraction in which you could lose hours without realising.

There’s a remarkable wealth of artefacts here, from all eras of Denmark’s past.

If you see nothing else take a look at the Trundholm Sun Chariot. It’s a Bronze Age item, dating to 1400BC, with a bronze statue of a horse pulling a gold disc representing the sun.

According to Norse mythology the sun made its way across the firmament like this, towed by a divine horse.

The Vikings are also well-covered by this museum, and many artefacts from this collection were sent on a tour of the worldin 2014.

What is Copenhagen best known for?

Founded in 1775, this august company is best known for its classic blue and white hand-painted dinnerware. Close by are Georg Jensen (Amagertorv 4), renowned for silver cutlery and jewelry, and Ilums Bolighus (Amagertorv 10), a department store devoted to Danish-designed home items.

Is Copenhagen worth visiting?

Copenhagen is a beautiful city. But expensive. Is it worth a visit? Yes.

Is it safe in Copenhagen?

Copenhagen is in general a safe city to visit. But just like in any other city, you should take certain precautions. Around Copenhagen Central Station you should pay extra attention to pickpockets.

Top Things To Do In Copenhagen

Copenhagen has gone through a radical change in the past thirty years as it has switched from a principally industrial city to one in which urban design, quality of living and people are considered first and foremost!

An urban living room for everyone to enjoy, you will quickly experience what a relief it is to simply be in a city that is not only full of uncountable treasures but is so easy to enjoy, being focussed on small details that really makes living here a delight.

You will see what I mean.

Your first instincts may suggest Copenhagen is perfect for a long weekend jaunt – and it is, but there is also so, so much more to see in this refreshing city you could plan a week-long city escape in Copenhagen and still not come close see it all.

One of the best cost-saving tips for those who want to see and make the most of this city is grabbing the money-saving Copenhagen Card which offers free admission to 86 attractions and museums – and free transport on trains, buses, metro and harbor busses in the wider Copenhagen region (including to and from the airport!)

If you plan on visiting even just a few museums, the Copenhagen Card will likely save you money, time and hassle – as it did for me – and you also never need to worry about figuring out which public transport ticket you need.

There are also flexible options for 24, 48, 72 and 120-hour visits – so maybe consider if the pass will be worthwhile for you. I especially loved being able to duck into almost any museum I spotted and see if I liked it, but not feeling obligated to stay for hours because I paid the steep entrance price!

Now we have that covered, let’s dive into this one-of-a-kind city and get inspired by all of the unique things to do in Copenhagen…

« The Remainder Theorem » The Climate Of The Eastern Seaboard